WHO WROTE THE BIBLE? 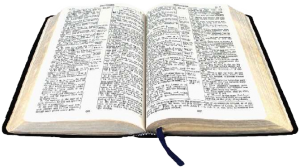 One of the first things we want to know about any good book is “Who is the author?”

Have you ever asked that question about the Bible?

Though Christians throughout the ages have affirmed that there is a divine inspiration of the Bible, there has always been a recognition that God spoke through human authors to write these various books.

I use the word “books” intentionally, because the Bible is a compilation of several books, 66 to be exact—39 in the Old Testament and 27 in the New.

So, when it comes to the Bible, we can speak of various human authors and one Divine Author. How exactly this interplay works is somewhat a mystery, but it’s worth considering these words from theologian J I Packer.

“What Scripture says, God says; for, in a manner comparable only to the deeper mystery of the Incarnation, the Bible is both fully human and fully divine. So all its manifold contents—histories, prophecies, poems, songs, wisdom writings, sermons, statistics, letters, and whatever else—should be received as from God, and all that Bible writers teach should be revered as God’s authoritative instruction”

So, if we agree with Dr. Packer that the Bible is God’s words to humanity, we can also affirm that God spoke through various personalities and that they utilized various genres of literature to communicate their message. In this sense, the Bible is also a very human book.

Now, there is much debate among scholars today about the authorship and date of certain biblical books, particularly those of the Old Testament. But in taking a general view of authorship, we can see that there are many books of the Bible that claim an author within the text itself, mostly the Old Testament Prophets and New Testament Letters. People like Isaiah, Jeremiah, Paul and James. We also see many of the Psalms assigned to a particular person. David, for example, figures prominently in the composition of many of these Psalms.

Other books are anonymous but history or tradition has sometimes linked these texts to a particular person. For example, the book of Lamentations has been ascribed to Jeremiah, and is even listed right after the book of Jeremiah for that reason. If we look at the Pentateuch, the first five books of the Bible, both the Jewish and Christian Tradition have claimed Moses to be the one who compiled much of that material.

These authors were from a variety of backgrounds, including shepherds, fishermen and kings. Their personalities come through their writings, so we can see a difference between the styles of Paul and John, even when they are both writing the same type of literature, such as a letter, or epistle.

As a general rule, we can say there are about 40 different authors writing over a span of approximately 1,500 years.

All of these authors are contributing to the one central theme of the Bible that from the beginning of all things to its future culmination, God is at work in the world to call a people to himself and to establish His purposes in all of creation.

So, who wrote the Bible? One Divine Author. Approximately 40 human authors. One Grand Story of Salvation from Creation to the New Creation!

Now…go and read this life-changing book for yourself!