God Loves the World: Red and Yellow, Black and White. 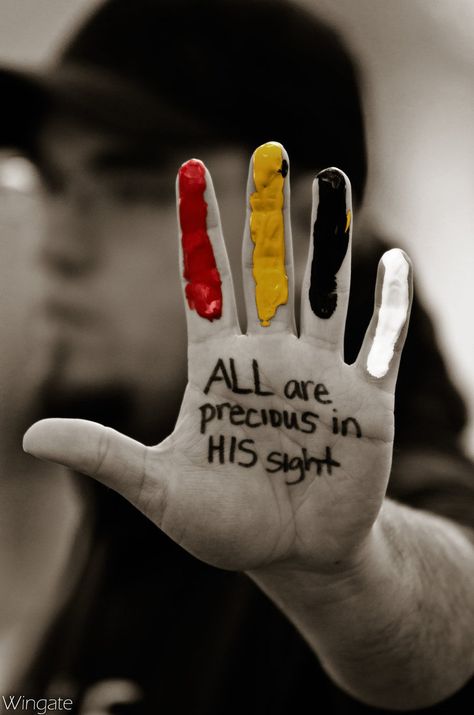 16 For God loved the world in this way: He gave his one and only Son, so that everyone who believes in him will not perish but have eternal life. 17 For God did not send his Son into the world to condemn the world, but to save the world through him. 18 Anyone who believes in him is not condemned, but anyone who does not believe is already condemned, because he has not believed in the name of the one and only Son of God.

I was fortunate to grow up in a family that saw different races and ethnic groups as equal, and strongly supported the civil rights movement in the 1960’s. Because of this, my parents were intentional about sending me to public schools in Nashville at the beginning of desegregation in 1971. I was in first grade. I was young enough to be oblivious to any of the concerns that circulated at that time. Though my experiences were not perfect by any means, one of the benefits is that I was exposed to living life with people of a different color, and, during my Middle School years, got to feel what it was like to be a minority. These are relatively happy memories as I look back on this period. I would not trade my experiences.

It was during these years that I became a Christian and began taking my faith more seriously as I entered 8th Grade at West End Junior High. That year, there was a classmate who had also become a Christian and was walking out his faith. Darryl Williamson, an African American friend, encouraged me, challenged me, and presented a model of what it meant to follow Jesus. Today, he is a pastor in the Tampa area. I am thankful for his influence during this formative year.

Our passage today tells us that God loved the world in such a way that He gave what was most precious to Him for our benefit—His one and only Son. He did not do this to condemn us, but that we might be saved through Jesus Christ.

But who is it that God loves? Is it just the people who look like me?

The “book ends” of the Bible can shed light on this. When God created people, He did so in His image. He gave them responsible dominion over creation as His representatives and image bearers. There is no person in all of humanity that does not bear the image of God, and therefore all have tremendous value in His sight.

When we glimpse into our unveiled hope in Revelation, we see Jesus being praised for redeeming people through his shed blood on behalf of “every tribe and language and people and nation” (Rev. 5:10). If God’s intent for all eternity is to unify a people from every shade and hue, then surely believers in Jesus today should be seeking unity as we love and serve him now.

Yes, our American South has a checkered history in this area. But the church is the great hope for the world. With all the tribalism fracturing our society, let followers of Jesus show the love and unity that we have as we live out all the implications of the gospel – being reconciled to God and to one another. “In the same way, let your light shine before others, so that they may see your good works and give glory to your Father in heaven” (Matt. 5:16).